During a busy start to 2016, Mr Loadlink picks a soundtrack, dreams of a day out at Wembley and gets in a tangle with his shoelaces.

I didn’t expect this to be the lead of my first blog of the year, nor did I anticipate sitting in the boardroom with a guitarist, tapping my foot to the Straightpoint theme tune, during the first week back from the holidays. But no sooner had PH Media set up their equipment and played a few sample tracks, I was sold on the concept of the company having its own audio identity.

I’m a big believer in percentage gains and the small components that go into each good—or bad—experience. It’s not just the food, it’s the cleanliness of cutlery (silverware), efficiency of service, value for money and quality of dining environment. Same in business. From being selected as a viable solution provider, a lot of systems are at work from enquiry to order to delivery to after-sales to positive referral and repeat business. There are a lot of chances to get it right—and wrong.

A quote from Sir Dave Brailsford, former frontman of British Cycling and inspirer of great successes on two wheels, resonates: “If you broke down everything you could think of that goes into riding a bike, and then improved it by 1%, you will get a significant increase when you put them all together.” Again, the theory can be applied to the business world.

Another percentage-based statistic I read recently alarmed me. It said that over 70% of people will not call a company back if they have a bad first experience on the telephone. Consider how hard the engine of a business has to work to get an enquiry. Thousands of revs per minute have already been recorded. It might have taken an overseas trip, a lengthy pitch at a trade show, a company visit, a reputation built over many years and more, only for a delay in picking up the phone, poor answers to initial questions or, worse, an unfriendly greeting, and you’ve fallen off the bike onto the tarmac. Face down.

Reading the statistic didn’t provoke any emergency action here because we are already aware of the importance of a quality experience at the first point of contact, but it did get me thinking about how we can improve the telephone and general customer experience even further. A subsequent conversation with PH Media quickly snowballed and before long we were pedalling towards an audio brand identity and custom voiceovers that would effectively create the Straightpoint soundtrack.

Working with the audio professionals and deciding on voices, tones and tunes that captured the essence of a vibrant, bold, innovative, business, that motivates itself with an overriding goal to make the lifting industry a safer place, was an uplifting but challenging experience.

For motivation I was thinking about the dull, claustrophobic experience of moving between floors of a building in a lift (or elevator as I’m writing from North America) made even worse by dreadful piped music. Lifts have their own brand of pre-recorded nonsense, seemingly composed to make us want to get out two floors early and take the stairs. By contrast, I think we’ve struck the right chord and I’m excited about uploading the technology to our systems in the coming weeks.

Think of master systematiser McDonald’s and its iconic jingle. If your company had a song, what would it sound like?

Exploding onto the scene 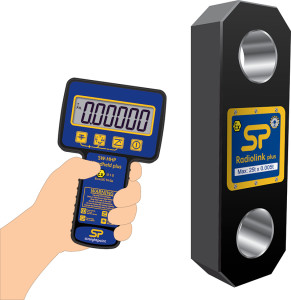 Some weeks are more memorable than others and week commencing 18 January will live in the memory for a long time as one of the most significant in our history. Not only did we receive approval on our new ATEX version of the Radiolink Plus, but we welcomed two industry heavyweights to the company. First, Dave Mullard joined as business development manager on the Monday before our new project engineer, Sarath Chandran, arrived three days later.

I believe one can tell a lot about a company by the personnel it retains and recruits. I’d encourage readers of this blog to set the revolving door as a barometer by which to measure their success. We already had great staff retention but recent acquisitions, including that of Dave and Sarath, are taking the company to the next level and equipping us to pioneer development of force measurement, load monitoring and suspended weighing load cell technology.

In his interview for the announcement we shared with trade media, Sarath said, “I believe that in the future, Straightpoint will provide a system without a requirement for display devices. Instead, we will implement a fully web-based system that facilitates remote troubleshooting and allows the user to check the system’s performance.”

It’s an ambitious statement but as the Internet of Things becomes an increasingly hot topic, we need to set the bar high.

Dave was equally forthright in response to questions put to him, saying, “I am convinced Straightpoint will pioneer progression of the lifting industry. It is a very dynamic business and has demonstrated time and again its ability to react to market situations or customer demand and deliver a solution.” 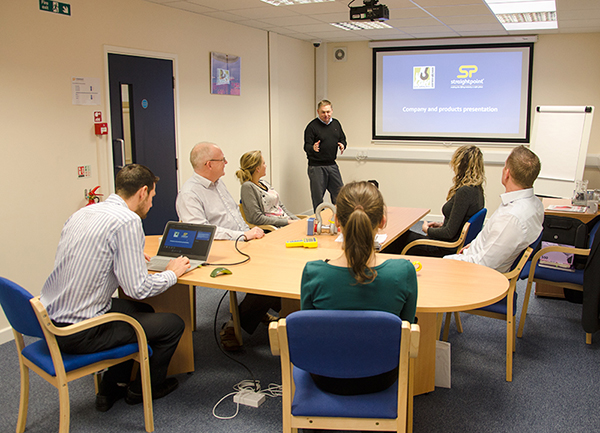 Leading a session as Dave Mullard, our new business development manager, gets his first taste of the Straightpoint boardroom.

The pair have already got column inches from lifting equipment-focussed and other industrial journals, as editors welcomed the alternative to the boilerplate text so often associated with personnel announcements.

It’s important not to let the early days drift by when new faces arrive at a company. I don’t buy into the theory that people need time to get to know their surroundings and settle in on their own. We set a programme for Dave and Sarath so they quickly became acclimatised. This procedure wasn’t isolated to their own roles or workspaces; they were exposed to every process at the company and spent time with individuals responsible for each activity. Walls, staircases and floors are only physical barriers at Hampshire, UK headquarters. Everyone works closely together and it’s been good to see Dave and Sarath folded in the warmth of the team’s embrace. I know Roshan Divakaran, design engineer, will provide superb leadership for Sarath as they have worked together in the past.

Proper downtime is often contributory to productivity so with that (or any excuse) in mind, Dave and I were in the stands with my business partner, Peter McGreal, as the mighty Portsmouth, of League Two, progressed to the fourth round of the FA Cup with a 2-1 replay victory over Championship side Ipswich. Dave is a Wolverhampton Wanderers (Wolves) fan, who are lost in Championship mid-table obscurity and were dumped out of the cup by West Ham, so he relished the opportunity to see a competitive game. I could see his eyes lighting up as Gary Roberts put Portsmouth ahead with a penalty before Marc McNulty doubled the lead with a header to effectively put us through before a consolation goal from the visitors. 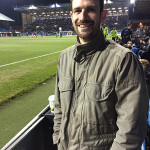 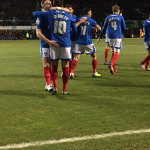 We had a great view as League Two Portsmouth progressed to the fourth round of the FA Cup with a 2-1 replay victory over Championship side Ipswich. 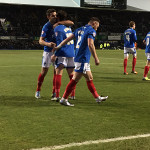 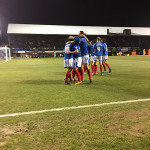 I managed to dodge the worst of Winter Storm Juno, which battered much of Canada and the eastern states earlier this week, to land safely in Toronto. Here, I enjoyed a productive meeting with wire rope and rigging specialist, Unirope, our Canadian distributor. I walked the team through our new catalogue, while their Montreal and Edmonton offices joined us via Skype. Before flying to our U.S. headquarters in Camarillo, California on Friday, where Q1 planning will take place, I have more exciting meetings in Chicago. More about those another time. 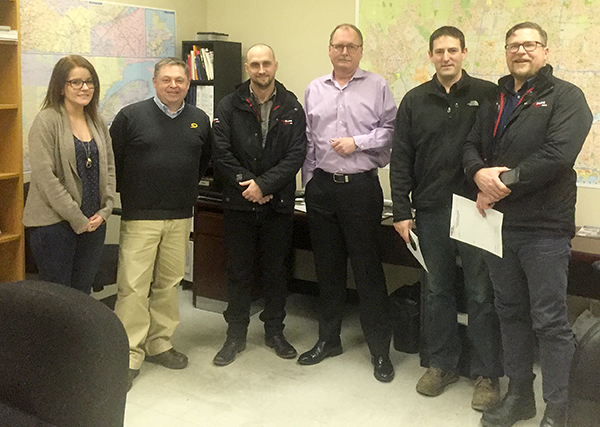 Unirope, our Canadian distributor, were great hosts as Winter Storm Juno blew nearby. Good job I had my new sweater on!

As is customary at the start of a new year, and particularly important at the outset of Q1, we have broken down our annual plan into quarterly sections and extracted from it our short-term goals. In the UK, we enlisted the guidance of Gary Mullins, of Action Coach, a leading business coaching company, to front a meeting dedicated to these processes. I will take John Molidor, general manager, Straightpoint Inc., and the team there through a similar jam session. 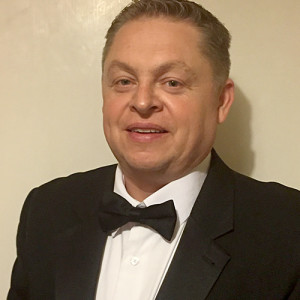 It’s always fun to dress up, particularly for the Action Coach awards evening.

We were again invited by Action Coach to attend their annual awards evening and celebratory dinner. Remember, at last year’s event they crowned us Business of the Year 2014. We enjoyed another fabulous night in their company and congratulated the latest winners in person. It also represented an opportunity to network with fellow business leaders and other companies under the wing of Action Coach. It’s a great community of local firms and we continue to learn a lot from each other.

A short anecdote before I sign off for another month.

Like you, perhaps, one of the last things I do before leaving a hotel room is put my shoes on. I was pondering the challenges of the day ahead as I fed the laces through the top eyelets and started to tie a bow. My thoughts were interrupted as I became aware I had much more lace in each hand than usual—and certainly more than I needed. I looked down and noticed that the laces also appeared a different shade than before.

I bet you’re thinking I’d put the wrong shoes on. No, they were the same shoes I bought at home and wore the day before. I tried again, as if I had been imagining it. Maybe the light was particularly bright or the laces not as tight in the shoe. I attempted a bow but the cords were so long I could have used them to rig a load. I had two choices: wear gigantic bows like a clown, or wrap the laces around my ankles or under my shoe multiple times like I used to do with my football boots. Neither option seemed appropriate for a day of meetings. Imagine the reception I’d have got.

“Hi, I’m David Ayling from Straightpoint. Yes, I always wear them like this.”

By now I was 100% sure they were not the laces I travelled with. I was convinced someone had put new ones in my shoes. Now I had to address this with reception. What else could I do?

“Are you claiming someone has been into your room and swapped your shoe laces, Mr Ayling,” the receptionist said, probably nudging her colleague as she put me on speaker phone.

To cut a long story short, it emerged that the housekeeper had sucked my old laces up the vacuum cleaner and damaged them beyond repair. As a gesture of goodwill and to replace them, they had purchased new ones and re-threaded them. I’m keeping the letter as a souvenir, which was dated 25 January 2016 and read:

Please accept and enjoy this complimentary breakfast for tomorrow.
Once again, we are very sorry and thank you for staying with us!
Sincerely,
Joseph
Housekeeping

I can’t end my first blog of the year on a better note than that.

Follow us on Twitter—@LoadCell—and use the hashtags #loadcell and #belowthehook.