Thinking Outside the Box…

One size doesn’t fit all when it comes to marketing stratagem, says Mr. Loadlink.

These days folks want to put labels on stuff—and people. Do you blog? Do you Tweet? Do you podcast? We’ve all been asked those questions in recent years. Do you employ inbound or outbound marketing methods? Most have been quizzed about that too.

The digital age has given rise to much debate about inbound versus outbound marketing. As readers will know, most modern forms of promotion—SEO, blogs, video, social media—are now categorised as ‘inbound’ and more traditional methods—direct mail, advertisements, cold-calling—are in the box labelled ‘outbound’.

The wrangling over which is more powerful was the inspiration for this blog because in today’s world we can too readily reach for a labelled strategy as though it were a miracle formula on a shelf. Marketing doesn’t work like that. Bad application of the right strategy can be as damaging as choosing the wrong methodology to engage a target audience.

Take these two paragraphs, for example:

1. This is the best blog in the world, written by the finest blogger there ever was. He works at the best load cell manufacturer on the planet and manages a team of super humans who’ve never made a mistake in their lives. The blog is all about what it takes to be the best—like them.

2. This blog shares guidance about choosing the right equipment to safely and efficiently complete load tests on dockside cranes. It is written by an engineer who is a thought leader in the sector and has been completing such tests for 25 years.

Which would you click? Which blogger would you choose to spend your lunch hour with? Both are examples of blogging, a form of inbound marketing, but just because they carry that label doesn’t mean they will work.

The same theory can be applied to Tweets, white papers and LinkedIn posts; a commercial, self-serving approach never works. To be effective, inbound marketing has got to be educational and communicate a solution before it sells it. It’s not to be seen as the easy, cheap option.

Our audience is getting younger and more likely to buy a product online than they are order one at a material handling show, but the case to click the order button has got to be compelling. Really, it’s got to knock their socks off.

These buzzwords don’t always allow for interpretation either. At Straightpoint, we embrace inbound marketing concepts but our end goal is always engagement of a target audience. In the lifting business, a good old-fashioned paper document still carries a lot of clout, which is why we continue to invest in production of a printed catalogue. The latest 48-page document was launched in three languages last month (October) and positively thudded onto recipients’ desks. 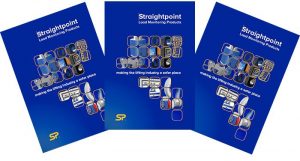 An inbound marketing purist might not agree with its production, but I say it stands up as an educational, advisory piece of work in its own right. Who cares what label society might put on it?

As I said in the press release we sent to media, what gives the team the most satisfaction is that the document encapsulates innovative, technologically advanced load cells and other equipment, the application of which makes the lifting industry a safer place. It’s the education surrounding that application that fits with any digital inbound marketing strategy—it’s just on paper.

Actually, I should be referring to it as the global load monitoring product guide, which is what we’ve been calling it to avoid confusion with the US spelling of catalogue (catalog). Put it in a digital format (it is available as a PDF) and link to it from a Tweet and it’ll pass anyone’s inbound marketing criteria checklist!

We publish a catalogue every year but this is the first time we’ve combined metric and imperial measurements in a combined document, hence the reference to the global load monitoring product guide. Based on the early feedback we’ve had, I’d urge other companies with fragmented documentation to consider doing the same thing.

We set ourselves a target to make each version of the catalogue better than the last and I’m confident we’ve succeeded in providing distributors with our best one yet.

Key to continued improvement of product-based literature is quality of information and innovative solutions. Not only did we include wireless low headroom links; the Impact Block, which measures the shock load and weight of branches as they are cut during tree felling or maintenance; and our ATEX and IECEx range, but we also teased the upcoming launch of Stage Safe, a load cell for the entertainment industry.

One can tell a product guide that has been thrown together from one that might be published only once a year but is the culmination of year-round research, development, engineering and marketing. I’d encourage any business that has just published a catalogue to start planning the next one—today.

We have already staged a two-day design meeting about 2017 product launches and have a timeline in place that factors in their inclusion in the next global load monitoring product guide. We were mindful throughout of the end goal to educate audiences and give them everything they need to make informed purchasing decisions.

Since my last blog we’ve entered the final quarter of the year, which means we’re into another 90-day plan. We don’t do this for fun, although we did have a team curry upon the conclusion of the last meeting!

Seriously though, on 31 December we want to be able to look back on the successful implementation of the plan or at least have enough structure in place so we can analyse what went wrong. Holding ourselves accountable is key to continued improvement. If it’s difficult to judge the success of a plan, what’s the point of having one?

As I’ve blogged about before, every department at Straightpoint is scrutinised on an ongoing basis. That doesn’t mean we peer over people’s shoulders and restrict their decision making, but it does mean we’re always looking at ways to make the business more efficient. One recent initiative on time analysis has been eye opening and is worth sharing. 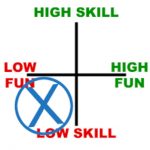 We’re using a tool whereby select members of staff are categorising their tasks into four blocks. The top one captures the highly-skilled, enjoyable, rewarding elements of their jobs, and the bottom one is reserved for the mundane parts that they might be guilty of putting off until Friday afternoon because they’re not as enriching. The blocks in between create a sense of scale.

We can then separate and analyse the blocks to try to expand on the contents of the top block and eliminate the bottom one. We’ve found that the exercise has not only taught us a lot about the people who fulfill existing roles, but it’s demonstrated where we need more personnel, resources or support. In some cases, the bottom block has created a ready-made job description for a new member of staff, for example.

That’s not to say the new role will be altogether unenjoyable; it might mean those tasks were burdening an experienced member of staff who has carried certain jobs with them throughout their progression at the company. A new employee will be challenged and uplifted by the same tasks, which creates a positive outcome for the individuals involved—and an exciting new opportunity for someone to join the business.

A bite to eat

Regular readers know there’s always room for a travel story or two in my blogs and this month’s entry is no different. I took another opportunity to visit distributor General Lifting Engineering (GLE) SKIP Lifting, which is based in Zhangjiakou City, Hebei Province, China.

It’s worth mentioning how energised it made me feel to watch them making notes and asking questions during my product presentation. It served as a timely reminder how important it is to pay attention to conference speakers and those delivering messages, in whatever format and to any size audience.

It’s demotivating to spend time on content only for the audience to sit thumbing their mobile phones. GLE showed great interest in the products and how they make the lifting industry a safer place. As a result, they probably got even more out of the session that I’d planned at the outset. 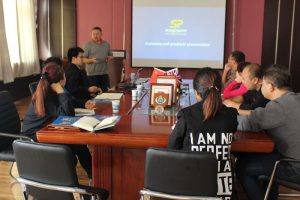 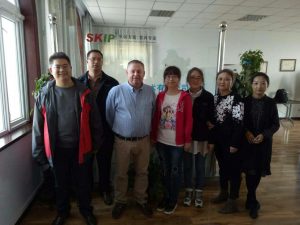 They also took me for some traditional local food called shouba yangrou or Zhangjiakou dining boiled lamb. The meat tasted fantastic but it was slightly unnerving to see the entire animal, complete with teeth, staring at me from the table!

I had planned to travel from there to Korea but I missed a connecting flight due to local weather and returned to the UK earlier than scheduled. It gave me an opportunity to give my congratulations to Dave Mullard, our business development manager, who celebrated the birth of his first child, Freya Amelia, with wife Kat. I wish them health, happiness and lots of adventures together as a young family.

That’s all for another month. Follow us on Twitter at @LoadCell and use the hashtags #loadcell and #belowthehook to engage.