Standing in for Mr Loadlink, Dave Mullard, business development manager at Straightpoint, talks about the importance of communication, goes for a run in Antwerp, laments a judge’s decision, and more.

Straightpoint director David Ayling, aka Mr Loadlink, stood beside my desk earlier this month with a small briefcase. It was well travelled, much like the man himself. The corners were damaged and the handle had been repaired with the branded tape we use to secure shipments. On it was a sticker that read ‘Blogging Kit’. 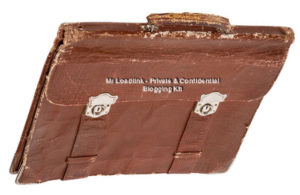 He placed the case on my desk and explained that he wanted me to take care of Mr Loadlink’s blogging duties for May and post an article here upon completion. Such was the extent of his work with our engineers on product development last month, he had to keep that activity confidential, which didn’t lend itself to the discursive tone of his monthly articles. It’s rare for him to take such a stance so I guess we should prepare for the unveiling of some pretty significant innovations soon.

In the briefcase were a notepad, pen, laptop, camera…and a pork pie. No sooner had I opened the lid than he reached over my shoulder to retrieve the pie, but he said I was to use the other items to log my movements throughout the month and report back with an educational, entertaining blog based on my recent travels and experiences since joining the company in January.

Big shoes to fill, I thought. I’ve been a longtime reader of the Mr Loadlink blog, since before I even joined the company, and I know I’m not alone in looking forward to his monthly anecdotes and stories from the lifting industry’s coalface. From all four corners of the globe he has blogged about making the industry a safer place, continued improvement of best practices, networking, trade shows, shoe-leather marketing, having his shoe laces stolen by housekeeping, even his need for speed satisfied by a recent Harley-Davidson ride up Interstate 45 and a trip to the drag racing.

My blog is slower-paced but I hope readers appreciate a different perspective. Here goes!

Writing notes for this blog has reinforced my belief in an ethos that I bought into when I joined the company. To lead a marketplace, pioneer its progression and truly make a difference, one has got to communicate openly and effectively. Key to realisation of our end goal of making the lifting industry a safer place is communication. There is a right amount of communication, and one can have too much. But it’s like food at a dinner party—a lot of it is generally a good thing.

An effective communication strategy is two-pronged. At the core of a company that communicates well is cohesion from leaders to apprentices and everyone in between. If a leader communicates well, everyone knows what the company stands for, what they can expect from it and what is demanded of them to contribute to its success. Ok, he is with engineers in a room marked ‘Top Secret: Do Not Disturb’ at the moment, but David Ayling operates an open door policy and is in constant communication with staff.

The second part of communicating is when a business speaks to those on the outside. This is more multilayered in the amount of different groups a company needs to address—distributors, end users, media, trade shows and trade associations, to name just a few important recipients of information. This is where tailoring messages to a target audience becomes important, but that’s something I’m led on by David and our public relations professionals, so I’ll leave that to them to blog about! Put simply, good companies are good at communicating. I’ve seen the impact Straightpoint has both from within and outside the company so I feel well equipped to judge. 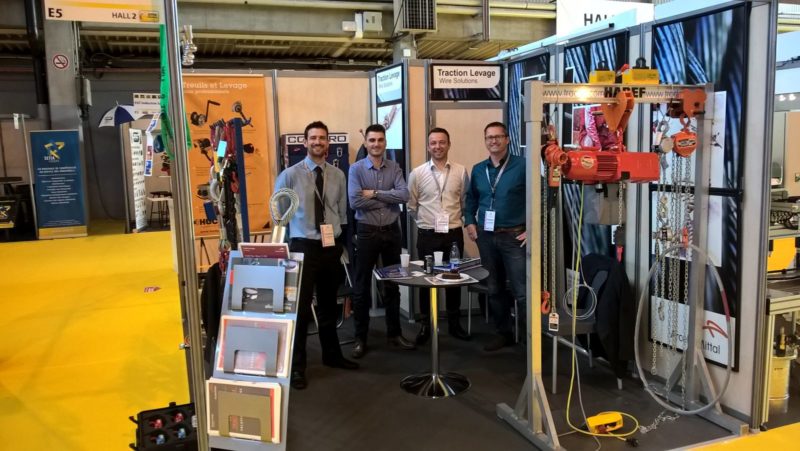 Conversely, consider the negative impact it has on a business if staff, customers and the industry in which they operate are unclear of their goals and culture. A tearoom can become a dangerous place if everyone is second-guessing what the managing director’s next move will be. More damaging still are customers who don’t know what a supplier’s new product does or why they launched it.

I think many companies fall into the trap of becoming anxious about disclosing information. I know David believes in the theory of abundance but to see some companies promote themselves, one would think their marketplaces have more suppliers than customers. Honest, ethical communication does not give away trade secrets; it builds trust and a good reputation. The successful companies I know are well respected, nimble, flexible, responsive to industry, and talkative.

How would you rate your company’s communication skills?

At the core of my role at Straightpoint is cultivating our existing distributors whilst expanding our network, with a particular focus on Europe, Africa and Russia. In the spirit of openness, it makes sense to take this opportunity to share how I feel my goals will be achieved. I hope I can provide some takeaways for others starting new roles or joining new industries with a similar job spec.

One can’t support a distributor—old or new—without an intrinsic understanding of the product range they will be responsible for selling further down the supply chain. At Straightpoint, we have come through a particularly active period of product development, so it’s even more important to be able to apply that innovation to the lifting and weighing problems that are being encountered in different industry sectors and geographies.

ATEX versions of our Radiolink plus wireless load cell, wireless Handheld plus, compression cells, shackle cells, load pins and the Running Line Dynamometer (or TIMH), are all new to our portfolio, for example. That’s without the extended range of our wireless products to 700m (nearly 2,300ft), Towcell and other developments. It’s important to keep reminding oneself what products do, who they might help and decipher what existing and prospective distributors can make the required connections in a supply system.

When it comes to cultivating existing distributors, actively supporting them and sharing knowledge is key. This month I accompanied our French distributor, Traction Levage on its stand at SEPEM in Colmar, France where we welcomed hundreds of visitors from the Alsace region and beyond. We talked load cells, applications and industries but also white storks (la cigogne blanche)….the sacred bird, which is purported to bring good fortune and happiness, is the emblem of the Alsace region. The white stork migrates to West Africa in August to escape the cold winter, representing yet another interesting territory which will be a focus for me in the future.

When finding new distributors, it’s a case of profiling. We have a pretty good idea as a company of the type of business we want to partner with. Size, product focus, connections, marketing prowess and reputation are all important. It goes without saying that wise choices can lead to long-term success, while being hasty in making appointments can be detrimental.

I was excited to welcome Anchor Industries as a distributor in South Africa, Mozambique, Namibia, Botswana, Zimbabwe and Zambia recently. As I said in the press release (there’s another reference to communication) we distributed about the appointment, Anchor is active in major hubs that will be key to our continued growth in the region. Leveraging its lifting, rigging, marine and offshore contacts, whilst harnessing an intrinsic understanding of load cells and below-the-hook equipment, the team is perfectly placed to represent us. The profile was a match, you might say.

The Blogging Kit came with me to Antwerp in Belgium last week, the scene for Breakbulk Europe, the largest exhibition and educational forum in the world addressing the needs of traditional breakbulk and project cargo logistics professionals. We had an exhibition presence alongside another manufacturer last year but this time I just walked the aisles. I’d recommend that as an option, even if it makes strategic sense not to exhibit at a show. I made a number of connections among specialised ocean carriers, freight forwarders, ports / terminals professionals, logistics providers and ground transportation experts, among others.

I also took part in the Breakbulk Business Run, which was staged one morning before the show. I was honoured to participate in an event that raised money for a charity called TEJO that offers, via various special houses in Flanders, low-threshold psychotherapy to youngsters between 10 and 20 years old. It was an early start but a good crowd of Breakbulk participants gathered at the meeting point at 7:30am to pound the streets of Antwerp. 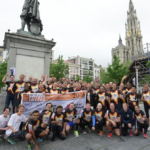 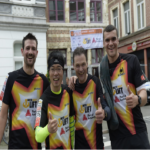 Here I am (left), relieved to finish the Breakbulk Business Run. I also managed to complete a day walking around the aisles of the show afterwards!

I’d urge others to consider participating in such co-located activity at trade shows. Not only did the event raise money for a good, local cause, but it also served as a networking opportunity. I actually gave myself about half-an-hour longer to ‘network’ than I’d planned because I got caught up in the group running the 10k route as opposed to the shorter 5k course! I ran the Birmingham Half Marathon last year but I haven’t done much training since and the last few kilometres dragged. Running crowds are known for their spirit and camaraderie however and everyone helped each other complete the race before enjoying a hard earned breakfast together.

More networking took place at the end of the month when I was among attendees at Carl Stahl’s summer party near Bergen in Norway.

With a soapbox to stand on, I want to conclude with a word about a recent decision by a U.S. judge who redefined a spreader bar as part of a load—not the rigging. The case surrounded what appeared to be a mining lift that was subject to inspection. A spreader was lifted without a load attached while personnel were underneath. This is common practice in an industry where we lift rigging equipment so riggers can connect it to loads.

What astounded me about the case was that the judge felt he was best placed to make a decision without consulting industry, even disregarding OSHA standards. The case again raised the issue around the corridors of the crane industry about striving for better harmonisation. That would be positive but this case proves how important it is for industry itself to lead initiatives to that end. In the short term, I understand the crane rental company deemed negligent is set to appeal and I wish them every success with that. 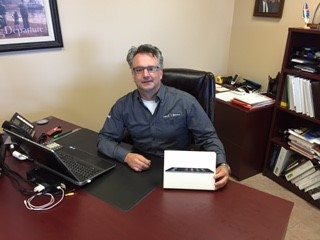 Mr Loadlink asked me to share with you a photo of Serge Lavoie, of Lam-É Industries, Canada, with the iPad he won for pulling the highest force (130lbs.) on a wireless Radiolink plus load cell setup with a couple of shackles on the Straightpoint stand at AWRF PIE recently.

Thank you for reading my first blog. I eagerly await my next opportunity to look after the Blogging Kit for another month!