Luck of the Irish…

Sometimes one can make their own fortune, says Mr. Loadlink upon his return from Ireland, where LEEA staged back-to-back roadshows last month.

David Mullard, SP business development manager, and I spent a week in Ireland at the end of June, where LEEA staged two roadshows in three days in Belfast and Dublin. I’ve blogged before about the association’s ‘Lifting the Load—Out on the Road’ initiative that brings seminars, a small exhibition and networking to a regional audience that can attend free of charge.

I like the format for a number of reasons, chiefly because it requires all participants to be dynamic and make the best of the short window of opportunity. In only a few hours—everything happens between 10am and, say, 2pm—a tabletop expo, networking and educational presentations are all staged, usually in adjacent rooms at a small hotel or similar venue. Snooze and you lose. Blink and you miss it.

The concept also leaves something to chance, which only adds to the appeal for me. It’s impossible for LEEA to guarantee large crowds at a free-to-attend event and there wouldn’t be time to network with 500 people anyway. It means every roadshow varies somewhat; some attract large, engaged audiences and others less so. To some extent, Belfast and Dublin followed suit with the latter drawing a larger delegation to a venue that was probably better suited to the concept than the other. But I liked them both.

The roadshows are a microcosm of any other trade show or conference and the same rules apply; if one is prepared to engage with people and make the best of it, there are opportunities aplenty, even at the quieter events. Too many exhibitors make quick assumptions about the footfall and likely outcomes of participation. They look at the lack of a queue at the door at 9:30am and write it off. They get their smart devices out and waste the day surfing the net. 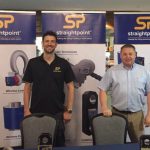 David Mullard and I at the LEEA Roadshow in Belfast. 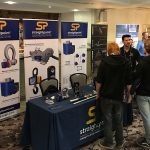 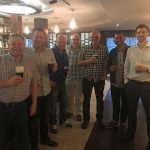 David Mullard and I with LEEA staff and friends during an after-hours networking session in Ireland.

These doom and gloom merchants are often the type who pass up the bonus networking opportunities to be had over breakfast, dinner and at the bar. Dave and I, meanwhile, had countless conversations with friends old and new outside of roadshow opening hours. A holistic approach should be taken to all business events, especially the short ones. At a bar in Belfast, I was about to order another Guinness to toast that very sentiment when the phone rang…

“Is that Mr. Loadllnk?” they said.

Ok, they didn’t ask after me by my blogging pseudonym but the conversation was uplifting nonetheless.

It was a local marina and dockside walkway specialist (there’s a market for everything!), interested in learning more about our centre of gravity and compression load cells. As luck would have it, we were only an hour away from their facility and booked a meeting the following day. It was fascinating to see the volume of cranes required at their yard alone and hear about potential use of our product range on jobsites.

We also made a point of visiting W.H. Scott & Son Engineers Ltd. (founded back in 1897), which offers a range of lifting and rigging gear, including our load cells, to clients across the UK from depots in Dublin, Belfast, Plymouth, Wexford, London and Bristol. Water utilities work continues to be a popular market for force measurement equipment, the team at W.H. Scott says.

Music to my ears

A lot has been said about the UK’s recent election results and subsequent commencement of Brexit negotiations with the EU. If you’re from far afield and have been following the news, you’ve probably gathered that the Conservative Party won, but lost, and the Labour Party lost, but won. Make sense? Probably not, but essentially it means the latter performed beyond expectations and the Tories have had to prop up a minority government via a deal with Northern Ireland’s Democratic Unionist Party (DUP).

Now, we’re arguably in an even weaker position to talk ourselves into a favourable Brexit than we were before we went to the polls last month. This isn’t a political blog but I’m unashamedly a Remain voter. I didn’t see the logic in leaving the EU when the referendum was held and I still don’t. However, I’m also a practical person and understand the importance of accepting the decision and moving on. We’ve got to somehow get to a place of political and economic stability as soon as possible.

On the upside, regardless of political persuasion, it should be celebrated that the election turnout was up 2.6% from 2015 to 68.7% and, moreover, half of those aged 18-24 came out to vote, up a whopping 16%. For too long the younger generation has felt detached from politics and poorly represented by politicians, but a combination of Brexit (the vote didn’t go the way most young people wanted) and the latest General Election has set a C-change into motion.

Young people are talking about politics, which is great to hear; it’s their future politicians are shaping, after all. Politics even made the headlines at the recent Glastonbury Festival—a famous music event that takes place over five days in Somerset, UK—where attendees were chanting the name of the Labour Party leader, Jeremy Corbyn, when he made an appearance on the stage. It’s not about whom they were shouting, but what they were shouting about—politics—and I give that engagement a standing ovation.

I’ve also been monitoring closely events across the English Channel, where French President Emmanuel Macron recently took office. I see similarities in how he’s assembling his top team to that of a successful business leader who understands that it takes people with different skill-sets and personalities to excel in the varied posts of government. Mr. Macron found room in his cabinet for a campaigning environmentalist and an Olympic fencing champion, for example. Some of the UK’s more one-dimensional political parties could take note.

The oil and gas industry in Singapore, like many places around the word, isn’t out of the woods but it shares a mood of cautious optimism with other hotbeds. Growth of some description will be recorded this year over last and the longer-term signs are good, says Gaylin’s load cell guru Presley Ng Seng Tat, who I visited recently. Fellow Singaporean Intermarine Supply Co. (Pte) Ltd was equally upbeat about market conditions.

Both are welcoming increased demand for our ATEX and IECEx range of products, which is consistent with a number of notable orders we’ve received here at headquarters. Our most popular product, the Radiolink plus (RLP), was our first explosion proof load cell and we recently received an order for 40 25t RLPs from a Greek shipping company, which noted the product’s Zone 0, 1 and 2 hazardous area classifications.

It’s been interesting to compare the market’s consumption of our ATEX range versus, say, our Clamp On Line Tensionmeter (or COLT). There’s a lesson for all product-based businesses to learn in that the speed with which new products go out the door isn’t always the most important barometer. Much fanfare greeted the ATEX RLP—and then the expanded range some six months later—while the marketplace was equally rapturous when we unveiled the COLT. However, the latter has proved to have a much quicker ramping up period; customers started buying it straight away.

That’s not to say it’s a better product than the ATEX range and herein lays the point. There are other load cells out there, thus, the ATEX range fills a smaller gap in the market. The COLT, meanwhile, is in a league of its own, offering a state-of-the-art Bluetooth load monitoring app among a myriad of standout features. It’s not more important to our growth strategy than the ATEX range, it’s just delivering at a different tempo.

Finally, we conducted six-monthly planning meetings at the end of Q2, which are always beneficial and enlightening, especially when you follow a record Q1 with another record second quarter! I fly to the states this week to complete a similar exercise with the North American operation (we have a 30-strong global team in place). Punctuating our year with these plans keeps us on track. Imagine implementing a strategy in January and leaving it 11 months before working out where something went wrong only a few weeks into the session.