Mr. Loadlink had matters of his own to attend to as the USA’s new president settles into the White House and the country prepares for Super Bowl Sunday.

Dodgy customer service aside, it’s felt like being in the USA even when thousands of miles away here in the UK in recent weeks. Donald Trump has been all over the headlines and everyone has got an opinion on the country’s controversial new president. Seek reprieve on a sports channel and it’s not long before even UK media references this Sunday’s 51st Super Bowl. America is a relevant but touchy and contentious topic.

It’s fitting therefore that my first business trip of the year was across the Atlantic to California, where Straightpoint’s USA business is headquartered in Camarillo. I was prepared for raging debate between those who voted for Trump and others more concerned about decisions he has made in the early days of his presidency. I was equally equipped for New England Patriots versus Atlanta Falcons wrangles as the sides prepare to battle it out in the Super Bowl this Sunday.

However, while there were indeed feisty exchanges about the key subjects of the day, the trip served as a welcome and uplifting distraction, with a long and energising agenda tackled with vigour by the North American team. Annual plans, induction of a new general manager and a talent restructure were priorities, alongside the usual networking activities that I always supplement such business trips with.

I’m prepared to put in as much time as required in January to make sure plans are in place across the company. Preparation frustrates many business leaders and owners as though it delays productivity. I disagree with that and believe the more effectively we plan, the better the results will be. I’d happily dedicate the whole of the first month of the year to planning, confident that we’ll be thankful for doing so as the next 11 months whizz by. It’s not always easy to troubleshoot when the unexpected catches us unawares.

It was the first planning session Jeff Miller, the new general manager of Straightpoint Inc., participated in and it was thusly a good time of year to make the appointment. Jeff brings a wealth of experience to the company with a background in sensors, aerospace and engineering operations, having excelled in a variety of roles including vice president and CEO.

As is the case at Hampshire headquarters, the focus for the USA operation is hitting sales targets so ambitious plans for our company can be funded and achieved. To that end, Jeff will introduce more lean processes and systems, whilst getting a handle on fiscal control. John Molidor, meanwhile, steps into a challenging new role as director of sales for the western hemisphere. Tressie LaBass, customer and sales support administrator; and Scott Abernethy, technical specialist, complete the team in Camarillo. Aaron Orsak, technical sales engineer (Houston); and Wayne Wille, technical sales manager (Minneapolis) work from satellite offices. 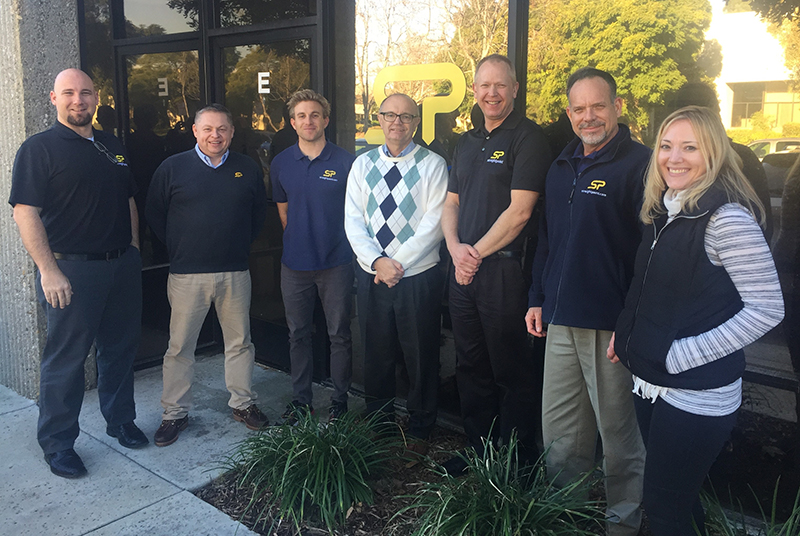 The lesson from the restructure is that it’s worth continuing to scrutinise even successful companies and subsidiaries. Straightpoint Inc. has earned its status as a gazelle company (the name is generally given to high-growth companies that increase revenues by at least 20% annually for four years or more), yet we haven’t been afraid to ring the changes or adapt strategy to realise exponential growth opportunities.

Tactics are important, as the New England Patriots and Atlanta Falcons (Donald Trump, even) would agree.

An interesting discussion topic during meetings with Jeff and the USA team this month was strategic versus tactical sales. John, for example, is adept at working with CEOs and other corporate professionals at strategic level, while Aaron might more commonly be engaged in tactical dialogue with a customer who has an immediate requirement for half a dozen load cells, for example. Both are equally important and the recent restructure will give all of our stateside personnel the opportunity to align their best skills with our valued customers and the growth strategy for the business.

One could think of our North American subsidiary as our largest distributor. We don’t manufacture product in the states but we serve our customers as though we do. As I blogged about last September, we recently switched to an enhanced system for global stock management. With product in the UK, Camarillo and Houston, it’s important to keep track of everything and ensure the inventory reflects demand so we can continue to deliver to short lead times (a hallmark of the company) but aren’t generating too much stock unnecessarily.

There are a lot of European companies in the lifting equipment business—we compete with some—who supply the North American market without such infrastructure and strength of personnel in place. We offer the marketplace product and expertise available in customers’ time zones, when they need it.

Do you remember the guest blog John wrote last August? In it, he said about 75% of customers make their first contact with us by telephone. Imagine therefore how important it is to make sure those calls are answered and that the customer knows they’re working with a domestic supplier.

It’s food for thought, if anyone reading this is struggling to upscale a North American business or has plans to penetrate the market for the first time. 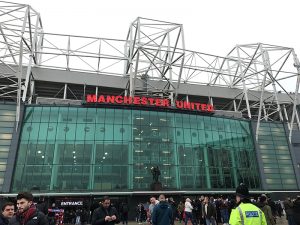 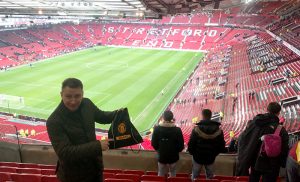 Straightpoint’s Gavin Arnell, who recently passed the LEEA P1E Foundation Course, was a deserving guest of DHL at Manchester United. 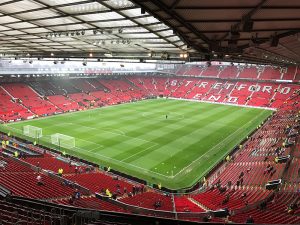 Not quite to the same extent as Donald Trump or Patriots quarterback Tom Brady, but UK employee Gavin Arnell has been in the news recently. First, the product technician was photographed on our social media platforms at his football team Manchester United’s ground, Old Trafford, where he was a special guest of DHL as the home team thrashed Reading 4-0 in the FA Cup Third Round. DHL play a key role in getting our products around the world and I was glad Gavin took the networking opportunity and saw his team win.

A couple of weeks later, Gavin was widely covered by trade media for passing the Lifting Equipment Engineers Association (LEEA) P1E Foundation Course. He out-performed lifting equipment professionals of far greater experience to pass at the first time of asking and now goes onto the Lifting Equipment General (LEG) Advanced Programme, a five-day intensive course, in April. As Alfie Lee, operations director, said in the press release, we are exploring the wire rope industry in greater depth and having someone with these qualifications will be of huge value.

We are in the process of completing our progression from development to full member of LEEA and Gavin’s exposure to the association’s training content is timely. As we continue to align ourselves with the leading representative body for all those involved in the lifting industry worldwide, we will also exhibit at all four LEEA roadshows this year in Sheffield (March), Belfast, Dublin (both June), and Bristol (September).

Finally, I can’t say too much about it now, but we’ll launch a groundbreaking innovation next month. The only clue I’ll give you is it’s for measuring tension on static lines. Watch this space!

I never thought I’d have a need to write about Donald Trump or Manchester United, let alone in the same blog, but these are unprecedented times. Thank you for reading.