The LEEA community should approach today’s challenges with the steadfastness of its founding fathers, says David Mullard, business development manager at Straightpoint.

I was honoured to be among guests as the Lifting Equipment Engineers Association (LEEA) celebrated 75 years at a parliamentary reception, held at the Terrace Pavilion, Houses of Parliament in mid-July.

As attendees heard, the origins of LEEA can be traced back to wartime Britain in 1944, when a small group of competing companies came together to address what they perceived as a serious threat to their livelihoods. On 3 June, nine people representing eight chain testing houses met at the Great Eastern Hotel, near Liverpool Street Station, and the idea to form an association was conceived. Several weeks later, a draft set of rules and regulations was drawn up and a decision was made that, regardless of size, all members should be considered equal, both in terms of influence and financial contribution.

We owe a lot to those founding members for encapsulating a set of core values that we still adhere to today. The reception epitomised that with individuals from all types of businesses, many of whom compete for the same customers every day of the week, coming together to celebrate an association that continues to campaign for its shared goals and combats common threats. Even in the years I’ve been around the association’s work, I’ve detected vast growth in terms of membership numbers, profile, and transformation of the Huntingdon, UK headquarters.

However, without resolute commitment, the London Chain Testers Association (the original name) wouldn’t have lasted a single year. It’s important to be mindful of that after LEEA used the event in one of the world’s most famous buildings as a launch platform for its 75th year initiatives, including the 75:75 Military Transition project; the Think Lifting schools engagement initiative; and the Apprenticeship Standard. 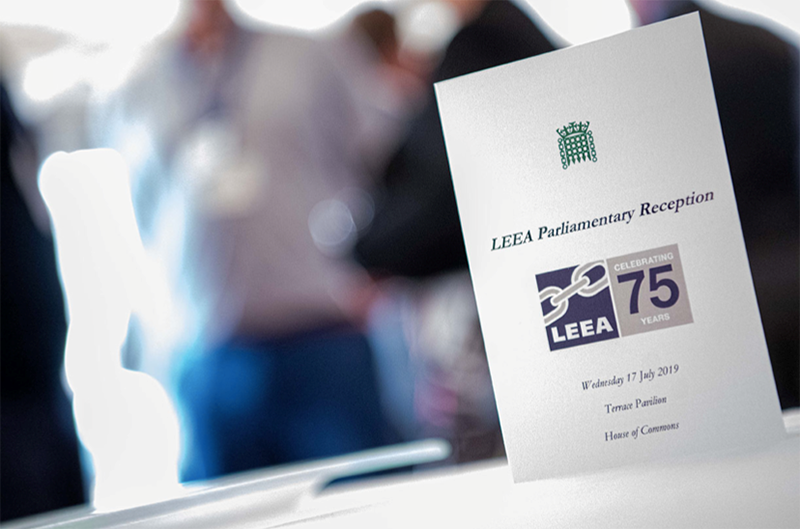 LEEA celebrated 75 years at a parliamentary reception at the Houses of Parliament.

All were well pitched to attendees and designed to get wholesale buy-in. It’s notable, for example, that a great number of LEEA employees are formerly of the military, as are many representatives of member companies. I’ve lost count of connections I’ve made with lifting professionals who were once in the Corps of Royal Electrical and Mechanical Engineers (REME), the division of the British Army that maintains the equipment it uses. Meanwhile, the Think Lifting and Apprenticeship Standard campaigns are entwined in the lifting industry’s battle against an ageing workforce.

I want to emphasise that reality.

Challenge of the century

There remains an overwhelming sense that engaging the next generation is the biggest challenge the association has had to face in its 75-year history, and one it has got to overcome long before the centenary celebrations in 2044. It is no coincidence that two of the ‘big three’ endeavours attached to the latest milestone revolve around young people (and folks leave the military still relatively youthful too). Thus, there were a number of occasions when that generation was referenced in parliamentary reception speeches, and the reaction of the room was interesting; it crackled at times, nervously.

There was forced laughter at one point when a presenter suggested that attendees exemplified an ageing workforce on the day. True enough, look over either shoulder and there were a lot of ageing, white men in the room. The industry is becoming more diverse—a number of young people and women were also in attendance—but it’s got a long way to go. I wonder if in the Great Eastern Hotel back in 1944 they stared at a precipice quite so daunting.

Another speaker tackled prejudices and stereotypes head-on. I paraphrase, but the comments were something along the lines of, we’ve all eye-rolled at the supposed shortcomings of our teenaged relatives. I detected a guilty look or two in the Terrace Pavilion, as though our own attitudes as an industry to younger people could be improved. A lot of LEEA’s initiatives are about making lifting more attractive to them, but we’ve also got to be more attracted to the assets of young professionals too. Paying lip service to this crisis won’t do. Yes, a young person would be lucky to find the lifting industry but we’d be fortunate to have them too.

I read with interest a recent article by Baz Trewhella, LEEA’s learning and development projects specialist, about establishing an apprenticeship standard for the lifting industry. As he discussed, a draft proposal to develop an occupational standard for the provisionally titled ‘Lifting Equipment Technician’ apprenticeship has now been devised, following a meeting of the Trailblazer Working Group (TWG) convened by the association. I welcomed comments that this apprenticeship will have a breadth of scope that ‘taps the shoulder’, as he put it, of the many sectors where lifting is involved. That ubiquity and diversity of lifting gear is a great selling point. 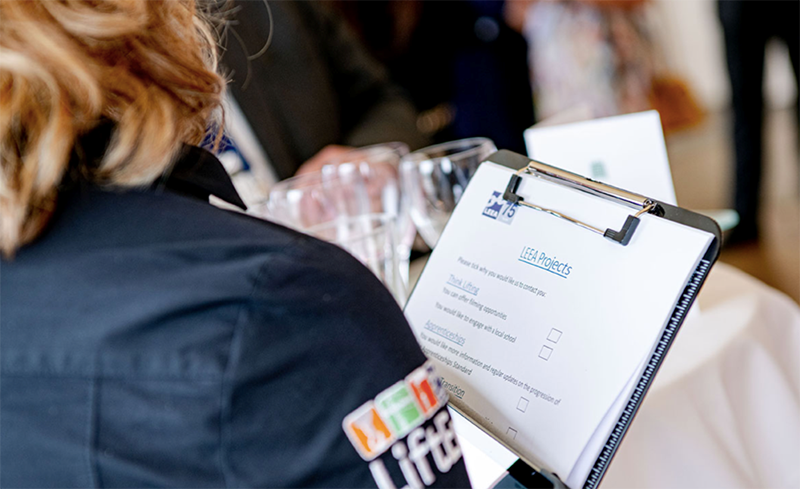 Other trades, such as brick-laying; carpentry; and heating, ventilation, and air-conditioning (HVAC) seem to do a better job of presenting themselves to young people; yet, they’re arguably less diverse and challenging. We’ve got to make sure that we promote ourselves better by driving Think Lifting and the Apprenticeship Standard (and the 75:75 Military Transition project) but also tick the boxes other industries do in terms of pay, mentorship, training, career progression, etc.

I was encouraged by LEEA’s comments that the new apprenticeship scheme will be 95% provisioned, meaning small and medium-sized enterprises (SMEs) can’t so readily reach for the excuse that they are unable to afford apprentices. Once an apprentice begins their time at a company, it’s then up to the employer to show the lifting industry for what it is. They can only do that by exposing them to the best parts of the industry and not limit their learning to mundane tasks. LEEA’s marketing campaigns and buzzwords, however worthy, will be futile if industry doesn’t better do its bit to present the lifting industry as a profession that reaches places other jobs cannot access.

It’s a sector that has taken me to some fascinating places over the years: shipyards, construction sites, railways, nuclear plants, dams, power plants, telecom towers, go-ape courses, wind turbine construction plants…even a tiny offshore oil platform. It’s like a VIP backstage pass where you get to see how stuff is built, maintained, upgraded, and dismantled. What other careers can the same be said about? Some jobs only expose an individual to a tiny part of a shipyard, construction site, or railway project. Grumpy cynics would point to the ‘butterfly minds’ of young people. I think a thirst for diversity and variation is only natural. And we can offer it as an industry.

It’s technologically advancing too, which is something we can better portray. Tell someone I work ‘below-the-hook’ and they might not be inspired, but explain that my company’s handheld display unit has a range of up to 700m (2,300ft.), and its software package displays and logs data from up to 100 wireless load cells simultaneously, and all of a sudden it competes with some of the most state-of-the-art markets around. Our ‘traditional’ sector is evolving too. My company’s new single capacity load cell, for example, introduces Bluetooth technology to existing and prospective customers still utilising outdated mechanical force measurement products.

Ongoing feedback suggests we’re at the dawn of the most exciting era in the lifting industry’s history. But it’s also going to be the most challenging. 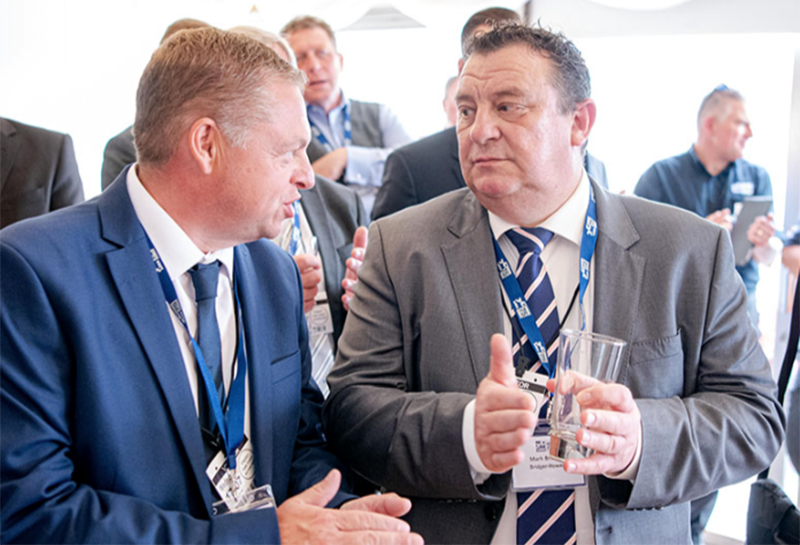 David Ayling (left), aka Mr. Loadlink, was, of course, among attendees at the parliamentary reception.