The ability to keep things simple, especially for customers, is a key component of all successful businesses, says Mr. Loadlink.

Alfie Lee, Straightpoint’s (SP) operations director, might look lean and mean, but he likes a takeaway dinner as much as the rest of us. He was telling me about a recent order he placed for an Indian meal. I don’t remember exactly what he ate but curry, rice, naan bread, onion bhajis, aloo something or other and papadums were likely all involved. He probably washed it all down with a cold beer, sat back in a recliner in his Isle of Wight pad, and reflected on another successful week in the world of load cells.

The thing is, Alfie never set out to order an Indian meal; his first choice was Chinese. But when he tried to place an order online, it became a stressful and ultimately unsuccessful experience. Everything was ok at the start; he’d put the dishes he wanted in his basket and proceeded to the checkout. However, the rest of the process was the online equivalent of having to take out a new mortgage in the supermarket before being allowed to pay the cashier.

The Chinese restaurant’s ordering system instructed him to setup an account, verify a password, log back in and start from the beginning. He’d landed on the snake’s head on square 99 of the board that took him right back to number 5 (you know the one!). Mind frazzled, Alfie decided to get his dinner from the Indian restaurant where he knew the online menu and payment procedure was a comparative breeze.

Naan bread is a simple recipe—but it tastes fantastic

I wonder how many people have had a similar problem with this establishment. The clunky online ordering system has probably turned off dozens of potential customers who’ve taken their business elsewhere. Maybe the proprietor is happy with sales but more likely he or she has been trying to figure out why the digital age hasn’t led to more online orders. Perhaps they’ve tried leafletting, placing ads in local media promoting the website, and even started posting content to social media. But it’ll all remain in vain as long as the process isn’t simplified. The trouble with customers, especially those who never actually cross a threshold, is they won’t take the time to explain why they left a site—they’ll just go.

The point of this preamble is to emphasise the value of simplicity—especially in business. I don’t mean isolated to the transaction or checkout phase but from the very first moment a client takes note of a product or brand to the after-sales programme and future repeat orders. At no stage should ‘complicated’ and ‘customer experience’ be in the same sentence. I dedicated a significant part of my life to ensuring SP was the embodiment of simplicity; we get an enquiry—we quote—you order—we ship. It’s that straightforward.

The power of simplicity was further accentuated during my latest trip to Asia, where I visited seven countries in four weeks. Travel in itself is never simple, as such, but working with SP is, as demonstrations of our new Insight software proved. Within moments of introducing new and long-standing distributors to the concept and outlining its three main features—multi-channel display and data logging mode, visualisation mode, and centre of gravity mode—people were able to run their own tests and experiment with it. Ok, we’re talking here about a bright, engaged audience but I expect delegations the world over to find it equally user friendly.

SP’s Insight software is technologically advanced, but straightforward to use

Of course, a lot of complicated work goes into making such a product simple. In fact, we spent two years during which time someone, somewhere was working on Insight every day. More business processes should be conducted with the same goal in mind. Alfie’s restaurant should have certainly prioritised simplicity when designing their online checkout system. When they tested it and it proved to be complicated, they should have scrapped it and started again. They’re not the only ones; clearly there are many products, services and other things in our business and personal lives that are seemingly designed to be the very antonym of simplicity.

When brainstorming a new innovation or product enhancement, the team responsible should constantly ask themselves why a button does what it does and why a wire goes where it goes. If safety and simplicity aren’t the answer then it should be redesigned or engineered out. We don’t have to tie up three sets of laces on each shoe or pull a sweatshirt on twice to wear it. If there’s no need to protect a takeaway menu with a password and it puts customers off if they’re asked to engage in a lengthy registration process to buy a portion of egg-fried rice, get rid of those features.

During my trip to Asia I spent some time with Crosby’s Stuart Glennie and Jamie Kirkbride; we spoke at length about the value of simplicity. As we agreed, no successful business is powered by emails and spreadsheets; they complicate things. Sure, they might have a role in certain processes, but only where necessary. Excel makes it easier for accounts teams to collate their figures but where a document of any kind doesn’t make a procedure more efficient or help a company conform to guidances or legislation, there might not be a requirement for it at all. Same for email; is sending it making your life or that of the recipient easier, better, safer or simpler?

Stuart and Jamie know the rigging industry inside out and it was a pleasure to hang out with them in between—and during—visits to distributors and end users. I hope they found our exchanges as uplifting as I did. A sign of a good time—and a productive business trip—is that it goes by in a hurry. One minute we were comparing notes ahead of our first appointment and it felt like the very next that we were shaking hands after the last and going our separate ways.

Simplicity, as Jamie would say in his Geordie (from Tyneside, UK) accent, “That’s lovely, that”. 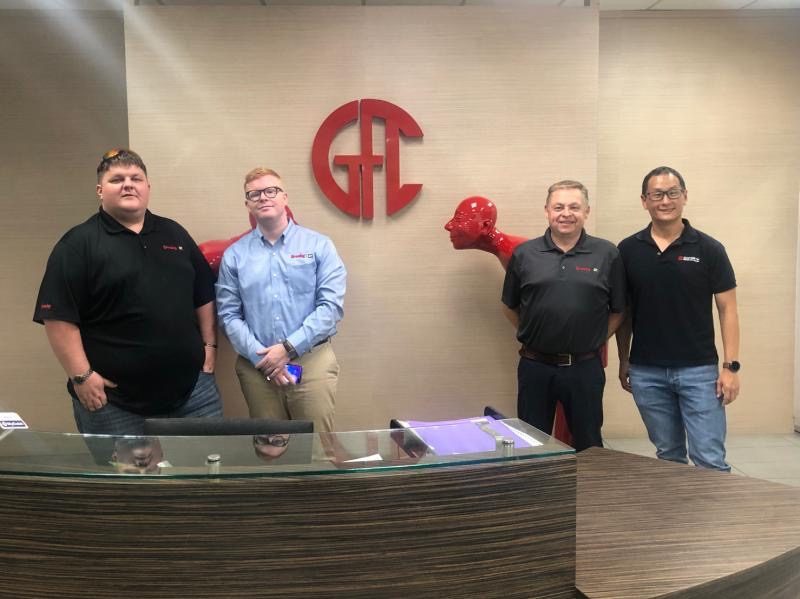 Jamie Kirkbride second right, here with Mr Loadlink and distributor GoForth, gives a thumbs up to the power of simplicity.

Simplicity will again be the name of the game as we prepare for next month’s LiftEx trade show, when the Lifting Equipment Engineers Association’s (LEEA) annual event descends upon the Marshall Arena, Milton Keynes on 13-14 November (the Speedy Expo was about to take place at press time for this article). Our exhibit will be stocked, decorated and staffed with simplicity of visitor engagement in mind. I continue to see exhibition stands (or booths) that are far too complicated—it’s unclear what a product does; the graphics are vague or littered with unnecessary detail; staff make operating the kit sound like rocket science; and visitors are overburdened with free literature.

What’s wrong with the good old fashioned, here’s my product, this is what it does, here’s how it helps?

Or, here’s our menu and that’s where to click to enter your credit card details and make a secure payment. Swift delivery follows.

Time flies: here I am with my son, Isaac, having setup last year’s LiftEx exhibit.