It’s amazing what can be achieved with a vacuum cleaner …

It’s amazing what can be achieved with a vacuum cleaner and a cold beverage, as proved during setup for the Topsides, Platforms & Hulls Conference & Exhibition, which took place in Galveston, Texas earlier this month (February).

Trade shows and conferences are hard work but the rewards can be great. For visitors, trade events start as the doors open but as exhibitors we often find ourselves onsite hours, sometimes days, earlier to setup. I have a huge amount of respect for companies who market themselves at these events given the scale of the time and economic investment involved.

At very large companies it is common for the top brass to arrive only as the doors to the event open, leaving setup to marketing teams and other staff, but John Molidor, the general manager of Straightpoint’s stateside operation, and I are hands-on throughout the process and we always like to have the stand just right. 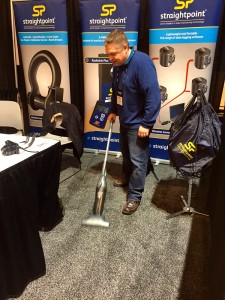 No job too small for Mr Loadlink

We try to give ourselves the best possible chance of success by making the stand look as appealing and eye-catching as possible. That’s why our exhibition kit includes a vacuum cleaner that John kindly caught me using on camera! Seriously though, attention to detail and even the way you appear on your stand can make you seem more approachable, which is very important at any event, especially one like Topsides where end users from the lucrative oil and gas industry roam the aisles.

We knew Topsides would present a unique opportunity to interact with end users who apply equipment to the design, engineering, construction, transportation, installation, and modification of topside structures, platforms and hulls, so setup was as important as ever.
Whatever the demographic, it’s possible to get a sense for how an event might unfold even as early as setting up the stand. If you turn up at the designated time and fellow exhibitors are downbeat and unenthused about creating a visual representation of their products and services to capture the imaginations of attendees and delegates, or organisers have poorly filed paperwork and reluctantly engage with their sponsorsand supporters, it’s a good indicator that the event might not go off with a bang.

John and I were thrilled with the leads we received and quickly signed up to exhibit again next year where we will no doubt catch up with our new friends and generate lots more interest in the product range.

Galveston is a coastal city that reminded me a lot of Portsmouth near where I live and I look forward to returning in 2016 when the event takes place 9-11 February at the Moody Gardens Hotel & Convention Center. The seafood was also outstanding!

While we all keep in touch when we’re travelling, it is always exciting to return to the office to see the great work that has been taking place while I’ve been away. It’s been all hands to the pump at Havant headquarters to prepare for the launch of our new catalogue, which will be released on 1 April and represents one of the most significant milestones in Straightpoint’s history.

We generally release a catalogue every year outlining modifications and improvements to equipment but the latest edition is generating unprecedented interest from our distributor network as it contains the details of a number of brand new products and innovations, including our new wireless handheld display. I don’t want to say much more than that in case it spoils the surprise!

The production process started a long time ago in our engineering department where the new products were tested and specifications outlined for each load cell or shackle, for example. Then the marketing team took it on to provide the written content and package the information in a way that it can be digested by our distributors and end users. Our talented marketing team highlight key product features so information about certain shackles dovetails with corresponding load cells to relate them to the variety of applications in which they will be used in the field.

Once we are happy with the content it will go through a design process so we have a working draft. Even then it will be dragged through the mangle an additional three or four times to make it as comprehensive as possible. We often get requests from dealers to top-up their supply of catalogues throughout the year so it is vitally important that we get it as close to perfect as possible.

I’m hugely excited about starting Q2 with the launch of the catalogue, especially as it is probably one of the most significant pieces of supporting literature that the company has ever produced. It will be converted into a PDF so customers can access the information digitally. Then we start the process again by adapting it to fit American A4 and convert it to imperial measurements. I know John and his team are relishing the prospect of distributing it to their stateside contacts.

It’s been a privilege to share the highlights of another busy, challenging and exciting month at Straightpoint. I hope you enjoyed reading.